Hip Pain: A 3-part exercise strategy to get rid of it 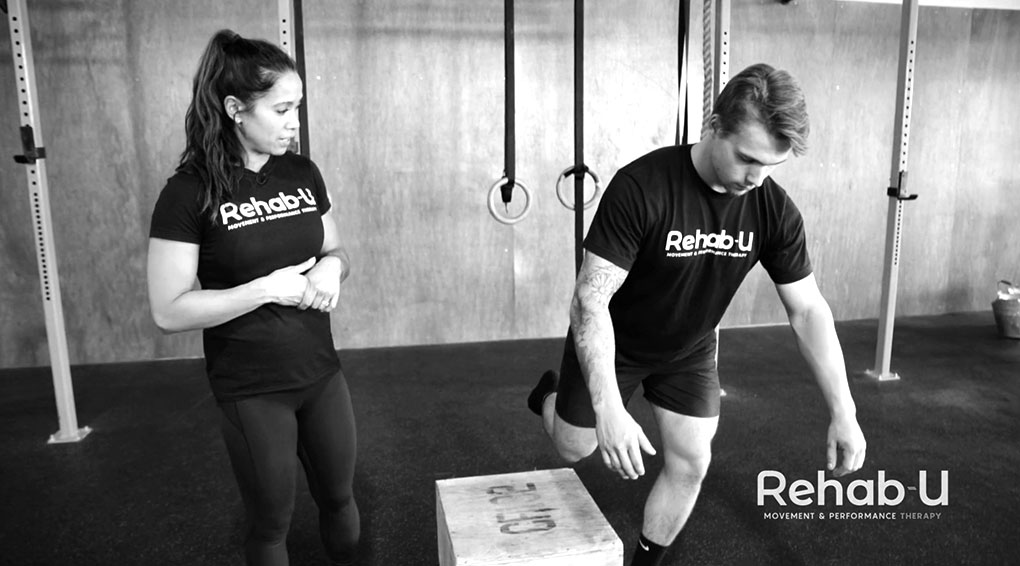 Hip pain manifests in many different ways, with the most common client complaints revolving around tight hips and/or anterior hip pain.  Many people associate their hip pain to tight hamstrings, tight hip flexors, or just plain tight hips.  Because soft tissue work has become so commonplace, most people are resorting to all sorts of stretching, foam rolling, and banded distraction work to address their hip pain. While sorting out soft tissue limitations can be part of an effective strategy for hip pain, there are many more factors that need to be taken into consideration.

The position of the pelvis certainly has a significant impact on the hip, which is why people often resort to passive strategies aimed at the muscles that act on the pelvis: the hip flexors, the hamstrings, the psoas. The hips anchor the pelvis, creating a very intricate relationship between the two.  While there are many different causes of anterior hip pain, some influenced by structure, impairments in dynamic control of the pelvis and core have been shown to be a modifiable risk factor that we can address.

Impingement can be defined as an abutment of the femoral head against the acetabulum or decreased joint clearance between the femoral head and the acetabulum, and is one of the common causes of anterior hip pain.  Much like with the shoulder, the hip is commonly placed in a position of impingement in athletic and functional movements, namely flexion, adduction and internal rotation (commonly called FADIR).

Here is a practical guide to building resilient hips to prevent to the risk of hip pain.

But aside from soft tissue limitations, if there are actually any, there has always been talk about “neutral pelvis” for optimal positioning and so intuitively, everyone is on the right track.  It’s the strategy for getting or staying on track that usually needs fine tuning.

Pelvic tilting and pelvic rocking are great sagittal plane exercises to improve this dissociation capacity.  Pelvic tilting teaches the individual to move the pelvis on fixed hips, moving the pelvis into anterior and posterior tilt.  It is also a great drill to find the neutral position.  Pelvic rocking involves the individual maintaining that neutral position while rocking forward and back on the hips.  The hips are moving into flexion and extension on a fixed pelvis.  I explain and demonstrate these exercises in the “Dissociation” section of How to Deadlift with Proper Form: The Ultimate Guide.

Dissociating rotation is also important.  We see these drills a lot with athletes involved in rotational sports, but they should be part of everyone’s hip care regimen.

Here is an exercise for femur on pelvis dissociation, moving the femur into internal and external rotation on a fixed pelvis:

To move the pelvis into internal and external rotation on a fixed femur, try this variation of a hip airplane that takes balance out of the equation to focus more on dissociation:

Just like with the previous exercise, spend some time at that end range trying to actively get some extra degrees of rotation.  What I mean here is, try to actively work beyond the range that is easily accessible to you.

These are exercises I like to use as early mobility drills.  I used to use the 90-90 position but have slowly moved away from it because it forces individuals into rotation ranges that we can’t be quite sure they possess from a structural standpoint.  That, and it is not the easiest starting point for most people.  I only use them now if I know client, and their hips, very well. If a client is using this exercise and feeling pain in the front of the hip, that is definitely not the road we want to be going down.

However, “neutral” is all about controlling that motion.  Essentially this is bracing: voluntarily limiting movement to create stability.  Further, studies on femoroacetabular impingement (FAI) have shown that dynamic changes in pelvic tilt influence the orientation of the acetabulum and must be considered as factors in conservative treatment.  This ties in with the many studies that have shown trunk control impairments in individuals with FAI.

Although FAI has a structural contribution and is a diagnosis made based on a triad of symptoms, clinical signs and imaging findings (structure), the idea that dynamic control of the pelvis influences hip positioning is an important concept for motion-related impingement as well.

Who says stability says control, so what we are really trying to do is maximize range of motion without “compensating” with changes in pelvic tilt.

For flexion, try the standing psoas march, pulling the hip into as much resisted flexion as possible while controlling posterior pelvic tilt:

Similar to the rotator cuff of the shoulder, the deep rotators of the hip act to stabilize the hip and are sometimes referred to as the hip rotator cuff.  Just like in the shoulder, these muscles have a dynamic role in maintaining alignment of the femur for lower extremity movement.  These short external rotators are the piriformis, superior gemellus, inferior gemellus, obturator externus, obturator internus. 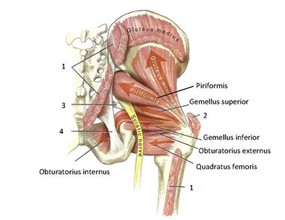 Because they have a stabilization role, we want to target them in multiple planes of movement and build their endurance.  There are a few exercises that I like to program for the specific goal of working the hip rotator cuff.  Because they are single-leg control exercises, they also improve dynamic balance which is another impairment that has been seen in FAI.

The modified airborne squat is a sagittal plane hip control movement.  It is a hip dominant movement, so it is important to let the hip hinge back and not just have the knee pitch forward.  Use a slow and controlled tempo, like a 3-second eccentric and 3-second concentric.  The eccentric control and single-leg position, and ideally working barefoot as well really targets the stability and strength in the hip.

Exercises that target the rotational component of the hips are interesting because they also give the knees more degrees of freedom.  The knee is a stable joint that mostly moves into flexion and extension, but it also needs to tolerate valgus and varus stresses.  Exercises that work on rotation of the hip also expose the knee to these varus and valgus stresses.

The first rotational exercise I like to use is a lateral lunge, where the foot glides laterally as far out as possible and returns slowly to the starting position.  As we drag the non-support foot back, the support hip is moving into adduction, external rotation and extension.

The second is the opposite movement, gliding the foot across and behind.  As the foot returns from behind, the support hip is moving into abduction, internal rotation and extension.

These are almost like closed chain PNF patterns for the hip.  Make sure to watch the main video of this article to see how these exercises are done.

Here is how you can put all of these exercises together to build a complete drill for resilient hips:

Remember, avoiding hip pain, or better yet, keeping the hips healthy to begin with is important.  The hips are an important link between the upper and lower extremity.  They are also quite intrinsically linked with the pelvis, which means that controlling the pelvis will have an important effect on hip mobility and stability.

While many people are focused on passive mobility strategies to address their tight hips and hip pain, they are missing out on the benefits of movement, dynamic control and balance as key components of hip health.

Preventing hip pain involves mobility in the form of dissociation and awareness, core control involving the pelvis, and strengthening in multiple planes and ranges of motion.  Of course, this is a strategy that requires intention and dedication, but it will improve your movement capacity and resilience!